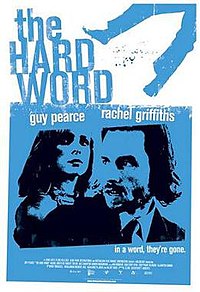 The Hard Word (released in some regions as The Australian Job) is a 2002 Australian crime film about three bank-robbing brothers who are offered a role in a bold heist while serving time in prison. The film was written and directed by Scott Roberts, and stars Guy Pearce and Rachel Griffiths.

The plot centers around three brothers, sophisticated armed robbers led by the shrewd Dale who work with their long-time lawyer, Frank and corrupt police to pull off the biggest heist in Australian history. Matters become complicated when Dale begins to realize that while he's been in jail his wife, Carol has been sleeping with Frank, who has schemes of his own.