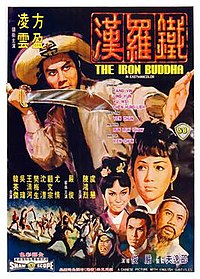 After attempting to rape the daughter of celebrated kung fu master Liu Peng, Xiao Tianzun is caught and punished, the master leaving a mark on Xiao's body. Years later, Xiao seeks out his revenge and slaughters Liu Peng, his two daughters, and all of the master's disciples save one. Luo Han, the last surviving disciple, decides to avenge his master when he discovers what has happened. To counter Xiao's Evil Poisonous Sword, Luo must find the legendary Hulong Blade. During his journey, Luo saves a damsel-in-distress named Peony and gets into a fight with Master Geng Xian and his goon squad. Having never seen Xiao Tianzun face to face, Luo is deceived when Xiao poses as an ally and tries to steal the Hulong Blade from him. It ends as it must in a final showdown between Xiao Tianzun and Luo Han.