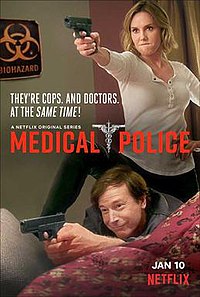 Medical Police is an American comedy streaming television series, created by Rob Corddry, Krister Johnson, Jonathan Stern and David Wain, that premiered on Netflix on January 10, 2020. It is a spin-off of the short-form alt-comedy series Childrens Hospital, that parodied medical dramas, whereas Medical Police is a parody of international spy thrillers. The series stars Erinn Hayes and Rob Huebel as Childrens Hospital doctors Lola Spratt and Owen Maestro. When they discover a world-threatening virus, they are recruited as government agents in a globe-spanning race to find a cure. In the process, they unmask a deep conspiracy amidst the outbreak.