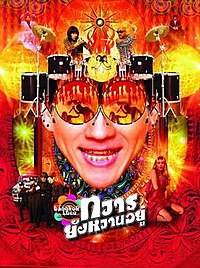 Bangkok Loco (, ) is a 2004 Thai comedy-musical-fantasy film directed by Pornchai Hongrattanaporn, written by Sompope Vejchapipat and starring Krissada Terrence. The story involves a gifted young rock drummer named Bay who commits a grisly murder and becomes a fugitive from the law. Trained by a monk in a style of drumming called the Drums of the Gods, which treats drumming as a martial art for the forces of good, he must face his opposite drummer from the dark side. The story is set in the 1970s and in a Forrest Gump fashion, the protagonist Bay is seen having an influence on present-day Thai popular culture. Internationally, the movie has gained a cult following because of its fantastically stylized and colorful production design and pop-culture references. The film was chosen for the "Midnight Madness" program at the 2005 Toronto International Film Festival.

Bay is a talented young rock drummer in Thailand in the 1970s. One day, he is practicing on his drum set in his apartment and is in a trance, but he suddenly notices that everything is covered in blood and that his drumsticks are actually knives. Apparently, he has killed his landlady, Mrs. Victoria. Panicked, he runs out his door, through the streets and alleys to his friend, Ton, who is also a drummer and is in a band called The PC with Meow and Ooh. Despite Bay's circuitous flight to Ton's apartment, she only lives next door to him.