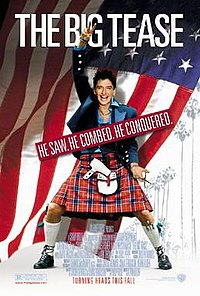 The Big Tease is a 1999 American comedy film starring Craig Ferguson, directed by Kevin Allen, and written by Ferguson and Sacha Gervasi.

Ferguson plays Crawford Mackenzie, a Scottish hairdresser who, while being filmed as part of a fly-on-the-wall BBC documentary, is invited to the World Hairdresser International Federation annual contest. The documentary team (with Chris Langham playing the interviewer) follows Crawford to L.A., where he discovers that his invitation is to be a member of the audience rather than a competitor. He eventually weasels his way into the contest and produces the greatest creation of his career)