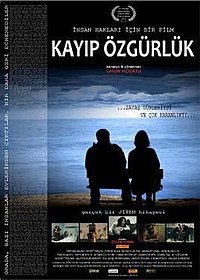 Lost Freedom is a 2010 Turkish drama film, written and directed by Umur Hozatlı, about the relationship between the sister of a detained terror suspect and the son of the Turkish gendarmerie chief who has detained him. The film premiered out-of-competition at the 47th International Antalya Golden Orange Film Festival and was screened in-competition at the 22nd Ankara International Film Festival.