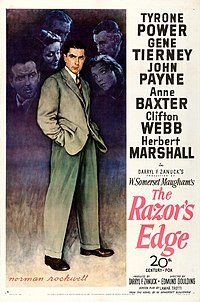 The Razor's Edge is a film based on W. Somerset Maugham's 1944 novel of the same name. It was released in 1946, and stars Tyrone Power, Gene Tierney, John Payne, Anne Baxter, Clifton Webb, and Herbert Marshall, with a supporting cast including Lucile Watson, Frank Latimore, and Elsa Lanchester. Marshall plays Somerset Maugham. The film was directed by Edmund Goulding.

The film, in which W. Somerset Maugham is himself a minor character, drifting in and out of the lives of the major players, opens at a party held in the summer of 1919 at a Chicago country club. Elliott Templeton, an expatriate who has been living in France for years, has returned to the United States for the first time since before the war to visit his sister, Louisa Bradley, and his niece, Isabel. Isabel is engaged to be married to Larry Darrell, recently returned from service as a pilot during the Great War. Elliott strongly disapproves of Larry because he has no money and no interest in getting a job with a future so he can support Isabel properly. Among the party guests are Larry's childhood friend Sophie Nelson and her boyfriend, Bob MacDonald.