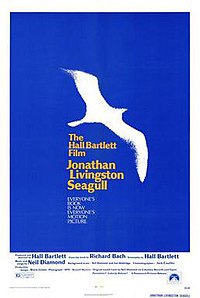 Jonathan Livingston Seagull is a 1973 American drama film directed by Hall Bartlett, adapted from the novella of the same name by Richard Bach. The film tells the story of a young seabird who, after being cast out by his stern flock, goes on an odyssey to discover how to break the limits of his own flying speed. The film was produced by filming actual seagulls, then superimposing human dialogue over it. The film's voice actors included James Franciscus in the title role, and Philip Ahn as his mentor, Chang.

As the film begins, Jonathan Livingston Seagull is soaring through the sky hoping to travel at a speed more than 60 miles per hour (100km/h). Eventually, with luck he is able to break that barrier, but when Jonathan returns to his own flock he is greeted with anything but applause. The Elders of the flock shame Jonathan for doing things the other seagulls never dare to do. Jonathan pleads to stay and claims that he wants to share his newfound discovery with everybody, but the Elders dismiss him as an outcast, and he is banished from the flock. Jonathan goes off on his own, believing that all hope is lost. However, he is soon greeted by mysterious seagulls from other lands who assure him that his talent is a unique one, and with them Jonathan is trained to become independent and proud of his beliefs. Eventually, Jonathan himself ends up becoming a mentor for other seagulls who are suffering the same fates in their own flocks as he once did.