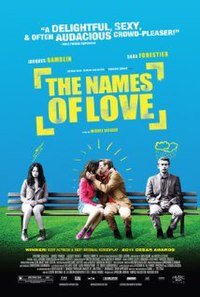 The Names of Love is a 2010 French romantic comedy film directed by Michel Leclerc, written by Leclerc and Baya Kasmi, and produced by Antoine Rein, Fabrice Goldstein and Caroline Adrian. The film recorded 764,821 admissions in Europe.

The film is semi-biographical, documenting the life of a young woman who uses sex as a weapon to influence right-wing individuals and conservative Muslims. Bahia Benmahmoud (Sara Forestier), a scatter-brained, free-spirited, young left-wing activist, sleeps with her political opposites in order to manipulate them to her cause, until she finds her match in Arthur Martin (Jacques Gamblin).