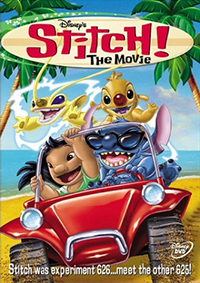 Stitch! The Movie is an American direct-to-video animated science fiction comedy film produced by Walt Disney Television Animation and Rough Draft Korea, released on August 26, 2003. It is the second film released in the Lilo & Stitch franchise and the third film chronologically, taking place after the 2002 first film and (by later extension) the 2005 direct-to-video sequel Lilo & Stitch 2: Stitch Has a Glitch. The film also serves as the backdoor pilot of the spin-off sequel series Lilo & Stitch: The Series, which debuted the following month. The story is an introduction to Dr. Jumba Jookiba's 625 experiments (made prior to Stitch) that he created with the financing of Dr. Jacques von Hämsterviel.

In deep space, ex-captain Gantu is in his new spaceship after his original one got destroyed in the first film and is hired by an alien named Dr. Jacques von Hämsterviel to retrieve the other 625 experiments.