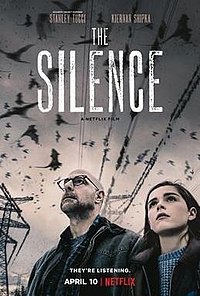 The Silence is a 2019 horror film directed by John R. Leonetti and starring Kiernan Shipka, Stanley Tucci, Miranda Otto, and John Corbett. The screenplay by Carey and Shane Van Dyke adapts the 2015 horror novel of the same name by Tim Lebbon. The film depicts a world under attack by creatures who hunt by sound. Shipka plays a late-deafened teenager who seeks shelter with her family, and a cult seeks to take advantage of her fertility.

A cave research team unearths an unknown species of pterosaur-like creature, referred to as "vesps", from a mine. The vesps violently kill the researchers, fly out of the mine, and seek the noisiest areas.