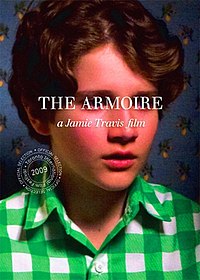 The Armoire is a 2009 Canadian short drama film directed by Jamie Travis. The third film in his Saddest Children in the World trilogy following Why the Anderson Children Didn't Come to Dinner and The Saddest Boy in the World, the film stars William Cuddy as Aaron, a young boy whose friend Tony (Ricardo Hoyos) has gone missing during a game of hide and seek, who is undergoing hypnosis to determine whether he can remember anything that may assist in locating Tony.