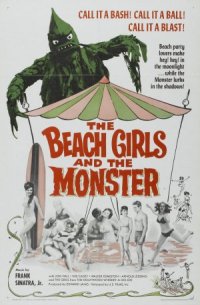 The Beach Girls and the Monster 1965

The Beach Girls and the Monster (aka Monster from the Surf) is a horror and beach party film, released in 1965, directed by and starring Jon Hall.

Young Richard Lindsay (Arnold Lessing) has given up his career in science in favor of his newfound passion, surfing on the Santa Monica, California beachfront. The beachfront is located near his father and stepmother's house, where he lives. This is to the great displeasure of his father, the noted oceanographer Dr. Otto Lindsay (Jon Hall), who is married to the younger Vicky (Sue Casey). Vicki is dissatisfied with Otto's relative lack of devotion to her. Also living with the Lindsays is Richard's sculptor buddy Mark (Walker Edmiston), who walks with a limp as a result of an auto accident Richard had earlier.