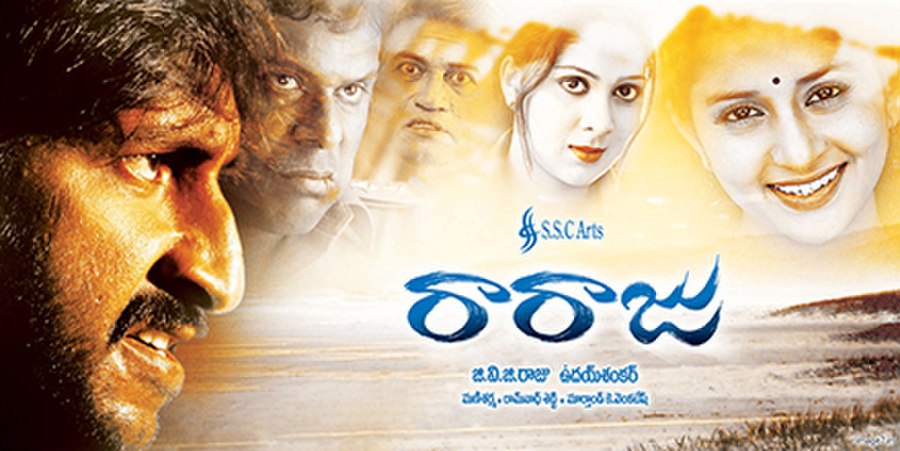 Raraju ( King of the King) is a 2006 Indian Telugu-language action film produced by on S.S.P.Arts banner and directed by Udayasankar. Starring Gopichand, Meera Jasmine, Ankitha in the lead roles Melody Queen K.S. Chithra also gave a guest appearance in the movie . The music was composed by Mani Sharma.

Kaali (Gopichand) is an ordinary man who arranges illumination and mike sets for local functions, including marriages and public meetings. He is very kindhearted and also a tough guy when it comes to recovering dues. Everyone in the colony fears and loves him at the same time. An SI of the area is always after Kaali and keeps saying that she is in love with him, but he did not care. At this juncture, a girl called Jyothi (Meera Jasmine) joins the colony. She ekes out her living by singing the chorus in film songs. When some goons try to attack her, she warns her that she is Kaali's girl. Like that, she enters into his life. Kaali thinks she loves him and loses his heart to her. On one occasion, Kaali comes to know her past. Surya (Sivaji), who is the son of a peon (Chandra Mohan), wants to become an IAS officer. Surya and Jyothi could not appear for the IAS examination due to a crooked police officer Kotireddy Venkat Reddy (Ashish Vidyarthi) who tries to implicate them in a brothel case. As a result, Jyothi's stepmother throws her away from their house, and she gets shelter in Surya's house. They both fall in love with each other. Unfortunately, Surya dies in an accident, but he continues to live in Jyothi's heart. On learning this, Kaali decides to help her in fulfilling Jyothi's ambition and makes her an IAS officer. In the process, he also teaches a lesson to Reddy. In the climax, Surya's parents force Jyothi to marry Kaali. When everything is ready, Kaali decides not to marry her as Surya is still in her heart.