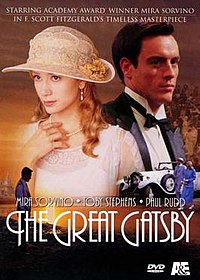 The Great Gatsby is a 2000 British-American romantic drama television film, based on the 1925 novel of the same name by F. Scott Fitzgerald. It stars Toby Stephens in the title role of Jay Gatsby, Mira Sorvino as Daisy Buchanan, Paul Rudd as Nick Carraway, Martin Donovan as Tom Buchanan, Francie Swift as Jordan Baker, Heather Goldenhersh as Myrtle Wilson and Matt Malloy as Klipspringer. The film was released on March 29, 2000.

Nick Carraway (Paul Rudd) is a young bond salesman who rents a cottage near the mansion of the wealthy and reclusive Jay Gatsby (Toby Stephens). Nick gets to know his neighbor, Gatsby, who was a poor man named Gatz before he left to fight in World War I. Gatsby was in love with a beautiful woman from a wealthy family, Daisy (Mira Sorvino). When he returned, Gatz was determined prove himself worthy to win her hand, even though Daisy had by this time married the socially prominent Tom Buchanan (Martin Donovan). Gatsby has yet to give up on his romantic dream and enlists Nick, who is distantly related to Daisy, in his plan.