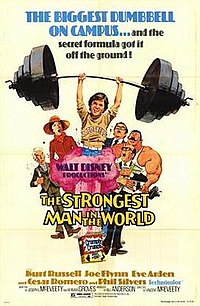 The Strongest Man in the World 1975

The Strongest Man in the World is a 1975 American science fiction comedy film directed by Vincent McEveety, produced by Walt Disney Productions and starring Kurt Russell, Joe Flynn, and Eve Arden. It is the second sequel to the 1969 film The Computer Wore Tennis Shoes, after Now You See Him, Now You Don't (1972).

Medfield College's Dean Higgins (Joe Flynn) is about to be fired for financial mismanagement due to extreme overspending by Prof. Quigley's (William Schallert) science class. Higgins finds out the high costs are for renting a cow as a test subject; they are feeding it various concoctions to make it fatter. In a rage, Higgins fires Quigley then threatens to have his entire class thrown out of college. When the dean slams the door as he leaves, Dexter Riley's (Kurt Russell) chemical experiment mixes with that of another student, Richard Schuyler's (Michael McGreevey) vitamin cereal mix.