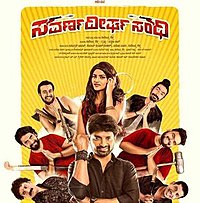 This gangster comedy revolves around Muddanna - an uneducated gangster, who is also a grammar freak. He and his gang commit crimes to help society, while also outsmarting the police and never getting caught. But one day Muddanna falls for a beautiful singer, Amruthavarshini. The film is loaded with ultimate fun, comedy, unexpected twists and turns and a musical drama. It has all elements that will leave its viewers in splits.