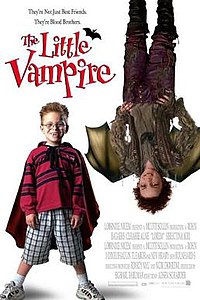 The Little Vampire is a 2000 comedy horror film based on the children's book series of the same name by Angela Sommer-Bodenburg, about a boy who tries to save a young vampire and his family from a ruthless vampire hunter. It was directed by Uli Edel and written by Karey Kirkpatrick and Larry Wilson. The film stars Jonathan Lipnicki, Rollo Weeks, Richard E. Grant, Jim Carter and Alice Krige.

9-year-old Tony Thompson (Jonathan Lipnicki) moves with his family to Scotland from California, where his family takes up residence in a small castle while his father is employed building a golf course on the estate of Lord McAshton. Since arriving in his new home Tony has experienced recurring nightmares about vampires and a mysterious comet. Things also don't get any better for him at school as he gets picked on by Lord McAshton's (John Wood) grandsons Flint (Scott Fletcher) and Nigel (Iain De Caestecker).