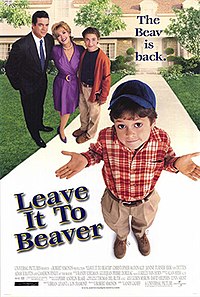 Leave It to Beaver is a 1997 American comedy film based on the television series of the same name. Many in-jokes and sub-plots relating to the series are adapted for the film. It features many of the original regular characters, most played by new actors, with some cameos by the original TV cast. Universal Pictures released the film on August 22, 1997.

The movie opens with a bakery truck driving down the street, and Beaver and Wally riding together on Wally's bicycle, delivering morning newspapers. Beaver tosses the newspapers wildly into the air with both hands: one of them plops into a wet cement, another one lands on a roof, one into a dog's mouth, one into a birdbath, one onto a cat, one into a man's leaf-vacuum nozzle, and one lands smack on a painter's head. Then the leaf vacuum explodes and throws dirt through the truck driver's window, causing him to slam on his brakes and have his sticky pies thrown about. Beaver and Wally apologize then ride away.