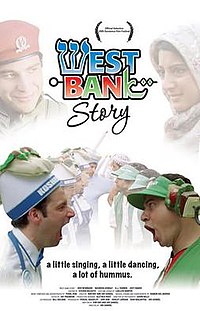 West Bank Story is a comedy/musical short film directed by Ari Sandel, co-written by Sandel and Kim Ray, produced by Pascal Vaguelsy, Amy Kim, Ashley Jordan, Ravi Malhotra, Bill Boland, and featuring choreography by Ramon Del Barrio. The film is a parody of the classic 1961 musical film West Side Story, which in turn is an adaptation of Romeo and Juliet. The film follows the romance between the relatives of the owners of rival falafel restaurants, one Israeli and the other Palestinian, respectively named the "Kosher King" and the "Hummus Hut," in the West Bank. The film stars Ben Newmark as the IDF soldier, Noureen DeWulf as the Palestinian cashier, A.J. Tannen as the Israeli restaurant owner, and Joey Naber as his Palestinian rival.

The film begins with a scene in which the Palestinians and Jews are both snapping their fingers, similar to the opening scene of West Side Story. The two parties head to their own family-owned falafel stands (Hummus Hut and Kosher King) where they sing "Our People Must Be Fed/Our People Must Be Served". During the day, Hummus Hut employee Fatima and Kosher King relative David are daydreaming about each other (in the romantic duet, "When I See Him"). When Fatima rushes to give a customer his forgotten leftovers, she has a chance encounter with David, and they realize their mutual attraction.