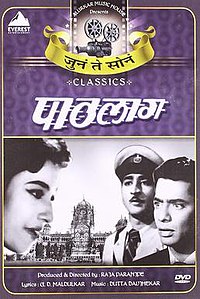 Pathlaag is a 1964 Indian Marathi-language thriller film produced and directed by Raja Paranjape. It is an adaptation of the novel Asha Parat Yete written by Jayant Deokule. The film stars Kashinath Ghanekar and Bhavana. It was a commercial success, and won the National Film Award for Best Feature Film in Marathi. The film was later remade in Tamil as Idhaya Kamalam (1965) and in Hindi as Mera Saaya (1966).

When Balasaheb Panse, a renowned Indian lawyer goes abroad, he receives a telegram informing him of the sudden death of his wife Asha. After she has been cremated and he is still in mourning, a woman arrested as a member of a criminal gang by the police claims to be Asha. She keeps telling Panse intimate details about their lives, expresses surprise that anyone could have thought her dead and implores him to have her released, causing a major emotional dilemma for Panse. Eventually, the second woman is revealed as indeed his wife, while the woman who died was her hitherto unmentioned twin sister.