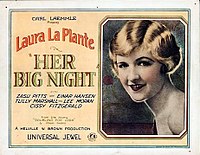 Her Big Night is a 1926 American silent comedy film directed by Melville W. Brown and written by Brown, Rex Taylor, and Nita O'Neil. It is based on the 1925 short story, Doubling for Lora, by Peggy Gaddis that was originally serialized in Breezy Stories magazine. The film stars Laura La Plante, Einar Hanson, and Zasu Pitts. The film was released on December 5, 1926 by Universal Pictures under their 'Jewel' banner.