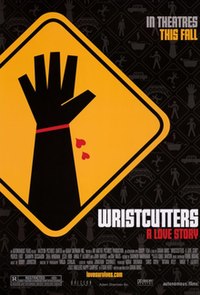 Wristcutters: A Love Story is a 2006 American black comedy fantasy road movie written and directed by Goran Dukić and starring Patrick Fugit, Shea Whigham, and Shannyn Sossamon. Its premise is set in a strange afterlife way-station that has been reserved for people who committed suicide.

After Zia (Patrick Fugit) takes his own life, he finds himself in an afterlife limbo much the same as life, but slightly worse. The color is dim, there are no stars, and no one can smile. This strange realm is populated by people who have died by suicide, such as Eugene (Shea Whigham), a Russian musician who lives with his mother, father, and brother – all suicide victims. Together they waste most of their afterlives in bars, until Zia learns from a friend, Brian (Jake Busey), that his ex-girlfriend, Desiree (Leslie Bibb), took her own life shortly after Zia's death. He and Eugene take to the road to find her in Eugene's rundown car. Early on, it is revealed that Eugene's car has two idiosyncrasies, a black hole underneath the passenger seat where items that are dropped disappear forever, and broken headlights that cannot be fixed by even the most adept mechanics. On their trip, they pick up hitchhiker, Mikal, who insists she has arrived by mistake, and is seeking the "people in charge" (a.k.a. the PIC) in order to be sent back.