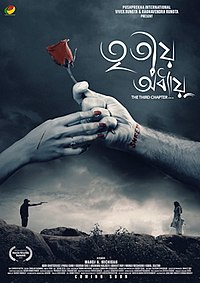 Tritiya Adhyay also referred to as Tritiyo Adhyay is a Bengali romantic thriller, directed by Manoj Michigan and starring Abir Chatterjee and Paoli Dam. The film was released on 8 February 2019. At the Darbhanga International Film Festival, the movie won the Best National Feature Film and the Best Screenplay Award at the Expressions Film Festival.

Kaushik (played by Abir), a sports teacher, and Shreya (played by Paoli), a botanist, meet after a gap of many years. What follows is a dark romantic thriller, giving the audience a glimpse of why the protagonists had ended their relationship years ago, their reunion in the present, and the possible (or not) future.