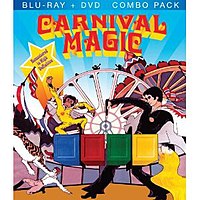 Carnival Magic is a 1981 American film directed by Al Adamson and starring Don Stewart. Originally intended as a family-oriented children’s film, it has since gained a cult following in underground and B movie film circles owing to its surreal plot and incongruously-adult themes.

Markov the Magnificent is a talented magician and mind-reader whose career is fading. When he partners with a super-intelligent talking chimp named Alexander the Great, the duo suddenly become a big draw—and the potential savior for their struggling, small-time traveling circus. But they must fend off a jealous, alcoholic tiger-tamer and an evil doctor intent on stealing the chimp.