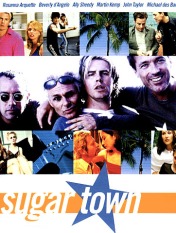 Sugar Town is a 1999 independent film co-written and co-directed by Allison Anders and Kurt Voss, concerning a tangled web of characters coping with ambition, fame, and the aftermath of fame. The film was named after the 1966 hit single Sugar Town by Nancy Sinatra.

Real rock stars play the roles of Clive (Duran Duran bassist John Taylor), Jonesey (former Spandau Ballet bassist Martin Kemp), and Nick (singer/actor Michael Des Barres), who form an aging supergroup built of refugees from other bands. They and their producer Burt seek backing from Jane (Beverly D'Angelo), a rich investor who will only help if the singer will sleep with her.