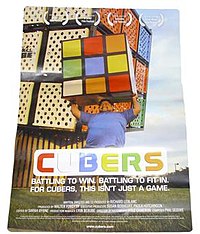 Cubers is a documentary directed by Richard LeBlanc and produced by Walter Forsyth. The documentary's production began in Toronto, Ontario, Canada, but visits Paris, Budapest, Orlando, Tel Aviv, Toulouse and more. It was released in North America on CBC The Lens, followed by Biography, Access, and three other major stations.

The documentary follows speedcubers from all over the world who can solve the Rubik's Cube in less than 30 seconds through the obstacles of becoming crowned the World Rubik's Cube Champion.