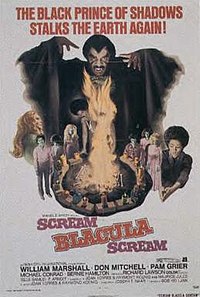 Scream Blacula Scream is a 1973 American blaxploitation horror film. It is a sequel to the 1972 film Blacula. The film was produced by American International Pictures (AIP) and Power Productions. This was the acting debut of Richard Lawson.

After a dying Voodoo queen, Mama Loa, chooses an adopted apprentice, Lisa Fortier as her successor, her arrogant son and true heir, Willis, is outraged.