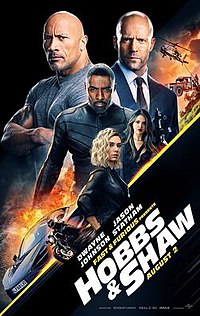 Hobbs & Shaw (also known as Fast & Furious Presents: Hobbs & Shaw or Fast & Furious: Hobbs & Shaw) is a 2019 American action film directed by David Leitch and written by Chris Morgan and Drew Pearce, from a story by Morgan. It is a spin-off of the Fast & Furious franchise set in between the events of 2017’s The Fate of the Furious and 2021’s F9. The film sees Dwayne Johnson and Jason Statham reprise their roles from the main series as Luke Hobbs and Deckard Shaw respectively, and also stars Idris Elba, Vanessa Kirby, Eiza González, Cliff Curtis, and Helen Mirren. The plot follows the unlikely pairing of the titular characters as they team up with Shaw's sister (Kirby) to battle a cybernetically-enhanced terrorist (Elba) threatening the world with a deadly virus.

In London, Hattie Shaw and her team of MI6 agents attempt to retrieve a programmable supervirus dubbed "Snowflake" from terrorist organization Eteon. Brixton Lore, an Eteon operative with cybernetic implants that allow him to perform superhuman feats, arrives and kills all the agents except Hattie, who injects Snowflake into herself before escaping. Brixton frames Hattie for killing her team and stealing Snowflake, forcing her to go on the run.