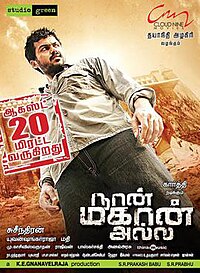 Jeeva is a Chennai-based youngster who hails from a middle-class family. His father Pragasam is a call taxi driver and the family's sole breadwinner. Jeeva meets a woman named Priya at their friend's wedding and soon they fall for each other. Upon meeting Priya's father, Jeeva is asked to get a job first in order to get married. Jeeva accepts, taking the job but soon gets fired. However, Pragasam, who had witnessed a girl being taken away by a group of 5 young men, gets attacked by them. He is admitted to hospital where they try to kill him again in absence of Jeeva but fail to do so. Pragasam is brought home and Jeeva starts taking responsibility for his family by reclaiming his lost job and maintaining all the accounts. Looking at the news reports of the girl that boarded his taxi and got mutilated by the 5 guys, Pragasam calls Jeeva to accompany him to the morgue where he helps the investigating officer by providing him clues about the killer. Sensing trouble, the gang enlists the help of Pey Babu, the uncle of one of the members, to plan and kill Pragasam after explaining how they killed the girl and her lover. When Pragasam and Jeeva go out to shop for the latter's sister's wedding, one of the men calls Jeeva on behalf of a store, thus separating him from his father. The men then create a stampede by throwing bottles as one of them stabs Pragasam with a piece of poisoned glass shrapnel. Pragasam instantly dies in Jeeva's arms and following his cremation, Jeeva tells the cops not to pursue the killers anymore as it would bring nothing but trouble for his middle-class family.