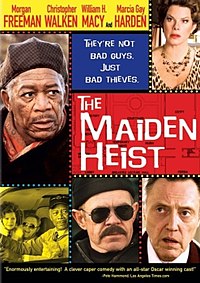 The Maiden Heist is a 2009 comedy film directed by Peter Hewitt and starring Morgan Freeman, Christopher Walken, William H. Macy and Marcia Gay Harden. The film was released as The Heist in the United Kingdom.

Roger (Christopher Walken) is a security guard at an art museum, where he spends a lot of time staring at his favorite painting, The Lonely Maiden, a beautiful woman staring forlornly out into the distance. Despite the fact he has a wife, Rose (Marcia Gay Harden), he has become rather obsessed with the painting. Rose wants Roger to retire so they can move to Florida. One afternoon, Roger learns that several pieces including The Lonely Maiden are to be permanently moved to another museum in Copenhagen, Denmark. Unable to follow the maiden, Roger falls into despair until he meets Charles (Morgan Freeman), another guard who has a similar attraction to a painting on another floor, a painting of a woman with cats.