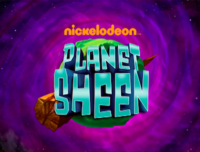 Planet Sheen is an American CGI animated television series. It is the second spin-off television series of the film Jimmy Neutron: Boy Genius, as well as a spin-off of The Adventures of Jimmy Neutron: Boy Genius. The series was picked up for 26 episodes by Nickelodeon for its first and only season. Jeffrey Garcia returned as the voice of Sheen, and Bob Joles and Rob Paulsen are the voices of Nesmith and Doppy. The series was originally animated by C.O.R.E. in Toronto, but animation production moved to Bardel Entertainment in Vancouver after C.O.R.E closed down. At that time Chris Neuhahn took over as Supervising Producer. Planet Sheen premiered on Nickelodeon on October 2, 2010 (along with T.U.F.F. Puppy) in the United States. The series aired its final episode on February 15, 2013.

After sneaking into Jimmy's laboratory and finding his new rocket ship, Sheen accidentally blasts himself into outer space when he disobeys Jimmy's warning note ("Sheen, do not press this button") and presses the button Jimmy mentioned in his note. 4,000,001 lightyears away, Sheen crashes on Zeenu an planet inhabited by the alien race of Zeenunians. Soon after the crash, Sheen wants to go home, but his rocket ship was smashed when he flew into a house belonging to an evil Zeenunian sorcerer named Dorkus.