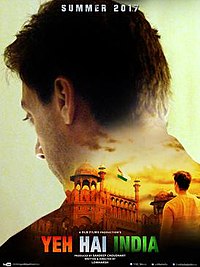 Yeh Hai India is a 2019 Indian Hindi-language drama film written and directed by Lom Harsh. Produced by Sandeep Choudhary under the banner of DLB Films Pvt. Ltd. The film is based on its writer's real life journey to several countries and his observations on the thoughts and views of other people about India. It features Gavie Chahal, Deana Uppal in the lead roles. Music by Raja Hassan and . G. K. Yogesh is the creative director of the film.