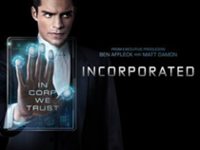 Incorporated is an American television drama series. The show premiered November 30, 2016, on Syfy. Before its official premiere, Syfy released an advance preview of the first episode online on November 16, 2016. The show concluded on January 25, 2017.

The series takes place in a dystopian Milwaukee in the year 2074, where many countries have gone bankrupt due to a number of crises and climate change. In the absence of effective government, powerful multinational corporations have become ''de facto'' governments, controlling areas called Green Zones. The remaining territories are called Red Zones, where governance is weak or non-existent.