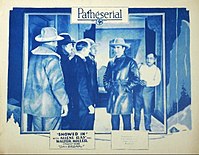 Snowed In is a 1926 American silent drama film serial in 10 episodes/chapters. Directed by Spencer Gordon Bennet, the film stars Allene Ray and Walter Miller. Aviation film historian James H. Farmer considered Snowed In as an "above average serial of the period."

David Sheridan (Walter Miller), a forest ranger who teams up with Shirley Kane (Allene Ray), an adventuress to go up against a gang of bandits. The gang is controlled by the mysterious Charles Redfield, whom none of the bandits have ever actually seen.