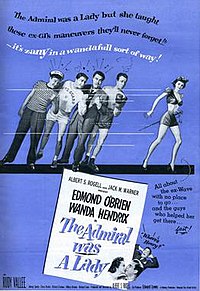 The Admiral Was a Lady is a 1950 American comedy film directed by Albert S. Rogell and starring Edmond O'Brien and Wanda Hendrix. The working title of the film was Once Over Lightly that was the title of one of the songs in the film.

After the end of World War II, Jean Madison (Wanda Hendrix), a former WAVE ensign, meets the former aircrew of an Army Air Corps A-20 Havoc light bomber named "Sinful Sinthia" when they go to collect their unemployment benefits. They are all members of the "52-20 Club," a government program which pays unemployed American veterans $20 a week for 52 weeks. Jimmy and his men "prove" to the government clerk that they are looking for work by placing an ad in the newspaper - "At liberty: combat crew. Four specialists eager and willing to drop bombs" - and receive their checks.