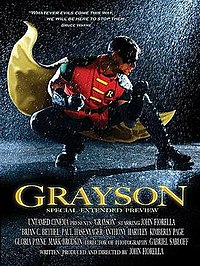 Grayson is a 2004 fan film made by John Fiorella featuring DC Comics character Dick Grayson along with several other DC Universe characters. Since it is a fan film, it was not allowed to be sold at a profit and was thus distributed for free on the Internet.

While no cohesive plot is apparent from the vignette style of the trailer, it can be pieced together that Batman has been murdered, and his killer remains at large. Dick Grayson is long since retired from his superhero days and raising a family with his wife Barbara Gordon. After his former mentor's death, however, he decides to resume his crime-fighting days as Robin. Remarkably, Grayson does not take up the Nightwing identity. The filmmakers said they chose this because many people outside the comic book community are unfamiliar with Nightwing and they wanted to appeal to a wider audience.