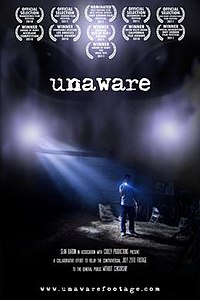 Unaware is an American science-fiction horror thriller film directed by Sean Bardin and Robert Cooley. It follows a vacationing couple who discover something disturbing on a rural Texas ranch. Like the films Paranormal Activity (2007) and The Blair Witch Project (1999), Unaware is an independent feature presented in "found footage" format. The producers have also followed in marketing the film to potential fans via Eventful.

In July 2010, vacationing couple Joe and Lisa are on their way to visit Joe’s grandparents documenting their trip by camcorder only to arrive finding a locked gate. Joe finally gets the property gate open. They arrive at the house to find a note on the door that his grandparents are away for a couple of days. Joe locates the hidden house keys and they enter the house, explore the yard and his grandfather's classic Oldsmobile Cutlass in the garage. Later that evening Joe proposes to Lisa and they get engaged.