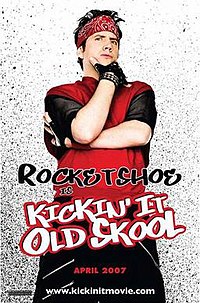 Kickin' It Old Skool is a 2007 American comedy film directed by Harvey Glazer and written by Trace Slobotkin. The film's cast includes Jamie Kennedy, Bobby Lee, Maria Menounos, Michael Rosenbaum, and Vivica A. Fox. This movie was released on April 27, 2007 and grossed $2.49 million in its opening weekend. The movie is about a young breakdancer who hits his head during a talent show and slips into a coma for twenty years. Waking up in 2006, he looks to revive his and his team's career with the help of his girlfriend and his parents. Music featured in the film is old school '80s hip-hop/rap.

In 1986, 12-year-old Justin "Rocketshoe" Schumacher (played as a youth by Alexander Calvert) and his breakdancing group, The Funky Fresh Boyz (Darnell "Prince Def Rock" Jackson, Aki "Chilly Chill" Terasaki, and Hector "Popcorn" Jimenez) (played as youths by J.R. Messado, Hanson Ng, and Anthony Grant, respectively), are ready for the annual talent show. The somewhat shy Justin has a crush on Jennifer (played as a youth by Alexia Fast), who is giving her a Garbage Pail Kid card in exchange for her Smurfette figurine. His rival, the obnoxious rich kid Kip Unger (played as a youth by Taylor Beaumont), shows up and gives her an expensive necklace. Justin and the Funky Fresh Boyz start the show, with his parents cheering for him. In an effort to impress Jen and win the contest, Justin uses a dangerous and untested headspin maneuver. It caused him to end up flipping off the stage and falling into a coma.