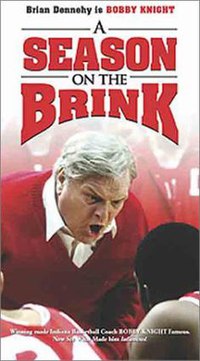 A Season on the Brink is a 2002 made-for-television sport drama film directed by Robert Mandel. Based on a book by John Feinstein entitled A Season on the Brink which detailed the turbulent 1985–86 season of Indiana University's men's basketball team, led by the controversial coach Bobby Knight, the film became the first ESPN television film, premiering on March 10, 2002.