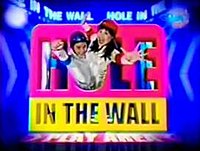 Hole in the Wall is a Philippine television game show broadcast by GMA Network. Hosted by Michael V. and Ogie Alcasid, it premiered on April 20, 2009 on the network's Telebabad line up. The show concluded on November 27, 2010 with a total of 2 seasons and 235 episodes.