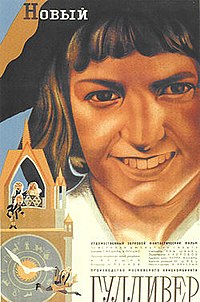 The New Gulliver (, Novyy Gullivyer) is a Soviet stop motion-animated cartoon, and the first to make such extensive use of puppet animation, running almost all the way through the film (it begins and ends with short live-action sequences). The film was released in 1935 to widespread acclaim and earned director Aleksandr Ptushko a special prize at the International Cinema Festival in Milan. The part of Gulliver was played by Vladimir Konstantinov, who was born in 1920 and died in 1944 near Tallinn in the Second World War. This was his first and only film role.

The story, a Communist re-telling of the 1726 novel Gulliver's Travels by Jonathan Swift, is about a young boy who dreams of himself as a version of Gulliver who has landed in Lilliput suffering under capitalist inequality and exploitation.