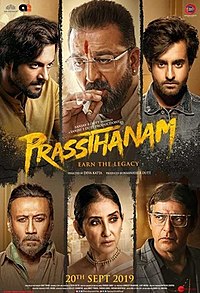 Prassthanam is a 2019 Indian Hindi-language political action film directed by Deva Katta and produced by Maanayata Dutt under her own banner Sanjay S Dutt Productions. A remake of the 2010 Telugu-language film of the same name, the film stars Sanjay Dutt, Jackie Shroff, Manisha Koirala, Chunky Pandey, Ali Fazal, Satyajeet Dubey, and Amyra Dastur. The film follows a rural politician who favors his intelligent stepson as the heir to his throne, much to the disappointment of his own son who's hot-blooded and starts to rebel against his decision.

Set in the backdrop of politics of Uttar Pradesh, Baldev Pratap Singh(Sanjay Dutt) is a four time MLA from Malihabad constituency. Baldev recently obtained a stay order against businessman Bajwa Khatri(Chunky Pandey), with which his popularity has soared and he is all set to win elections the fifth time. Majid Maqbool(Zakir Hussain) a leader in Baldev's political party is also in the fray and wishes to obtain party ticket for fighting elections from Malihabad constituency.