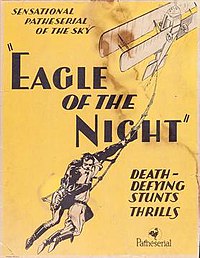 Eagle of the Night is a 1928 American drama film serial directed by James F. Fulton. Dismissed when released and completely forgotten in the modern era, the 10-chapter aviation serial starred real-life aviator Frank Clarke, a stunt pilot in such fare as Wings (1927), Hell's Angel (1930), and The Flying Deuces (1939).

Unscrupulous smugglers are attempting to steal the "Magic Muffler," a device that can make an aircraft practically silent. Flying at night would make the smugglers and their forays across the border, impossible to detect.