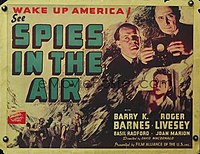 Spies of the Air (also known as Spies in the Air and The Fifth Column) is a 1939 British adventure film directed by David MacDonald and based on the play Official Secret by Jeffrey Dell. The film stars Barry K. Barnes, Edward Ashley and Felix Aylmer. Spies of the Air involves espionage in the period just before the outbreak of war in Europe that spawned a number of similar propaganda films linking aeronautics and spies. Films in both Great Britain and the United States centred on "... spies and fifth columnists (as) the staple diet of films made during the first year of the war."

Before the outbreak of the Second World War, British test pilot Jim Thurloe (Barry K. Barnes) is involved in an illicit love affair with his employer's wife (Joan Marion). He is caught up in an elaborate scheme to steal secrets from Houghton's (Roger Livesey) aviation company. Jim is suspected of betraying his country to a foreign power. Scotland Yard Inspector Colonel Cairns (Felix Aylmer) is aware that the plans of a top-secret aircraft would be of great interest to an enemy.