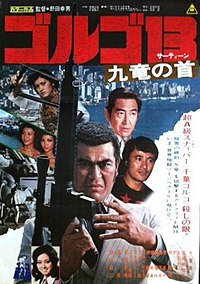 is a 1977 JapaneseHong Kong action film starring Sonny Chiba as the international assassin Golgo 13. It is the second live-action movie based on the manga series Golgo 13, after the eponymous 1973 JapanesendashIranian film.

Master assassin Duke Togo—codenamed "Golgo 13"—is hired by an American crime syndicate to kill Chou Lei Fang, a powerful member of the syndicate's Hong Kong branch who has been selling their drugs through his own channels. At the same time, he has to keep an eye out on Smith, a hard-boiled Hong Kong detective who is hell-bent on taking down Chou and his drug-manufacturing organization.