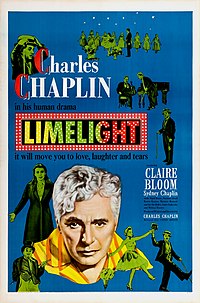 Limelight is a 1952 comedy-drama film written, produced, directed by, and starring Charlie Chaplin, based on a novella by Chaplin titled Footlights. The score was composed by Chaplin and arranged by Ray Rasch.

The movie is set in London in 1914, on the eve of World War I, and the year Chaplin made his first film. Calvero (Charlie Chaplin), once a famous stage clown, but now a washed-up drunk, saves a young dancer, Thereza "Terry" Ambrose (Claire Bloom), from a suicide attempt. Nursing her back to health, Calvero helps Terry regain her self-esteem and resume her dancing career. In doing so, he regains his own self-confidence, but an attempt to make a comeback is met with failure. Terry says she wants to marry Calvero despite their age difference; however, she has befriended Neville (Sydney Earl Chaplin), a young composer who Calvero believes would be better suited to her. In order to give them a chance, Calvero leaves home and becomes a street entertainer. Terry, now starring in her own show, eventually finds Calvero and persuades him to return to the stage for a benefit concert. Reunited with an old partner (Buster Keaton), Calvero gives a triumphant comeback performance. He suffers a heart attack during a routine, however, and dies in the wings while watching Terry, the second act on the bill, dance on stage.