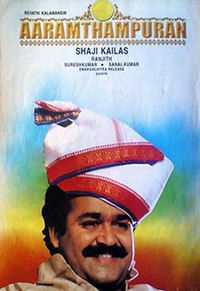 Aaraam Thampuran is a 1997 Indian Malayalam-language action drama film directed by Shaji Kailas, written by Ranjith and produced by Revathy Kalamandhir. It stars Mohanlal, Narendra Prasad, and Manju Warrier. The story follows Jagannadhan (Mohanlal), a former Mumbai-based criminal who buys an old kovilakam (royal manor) named Kanimangalam and shifts the balance of power in that village and he comes to be known as "Aaram Thampuran" (sixth lord). The film features original songs composed by Raveendran and background score by C. Rajamani.

Nandakumar (Saikumar), a business tycoon in Mumbai, faces huge financial loss when his manager Abey Mathew decides to broker a deal with an Australian group and another rival Indian firm. He calls up Jagannadhan (Mohanlal), alias Jagan, his friend and enforcer to intervene. Jagan lands up at the office of Abey and forces him to withdraw from brokering the deal with the Australian company, there by bringing massive profit to Nandan. In return, Nandan is profuse in his offer to Jagan, all of which he humbly disavows. Jagan finally demands Nandan a small favor. He wants Nandan to purchase an old palace at Kanimangalam, a village in Kerala, to which Nandan agrees. Jagan also expresses his desire that the palace should be bought in the name of Nandan, and Jagan should be there as a benami of him.