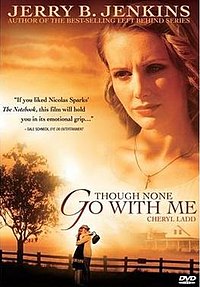 Though None Go with Me is a 2006 American made-for-television drama film that premiered on Hallmark Channel. It is directed by Armand Mastroianni, and stars Cheryl Ladd. The film is based on the best-selling book by Jerry B. Jenkins.

Elizabeth Leroy is a young woman growing up during the 1950s in the United States. She has devoted her life to serving God but through many hardships and heartbreaks over the years, her faith is tested. She begins to question the purpose of her life.