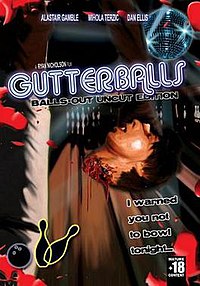 Gutterballs is a 2008 Canadian slasher comedy film written and directed by Ryan Nicholson.

On January 1, 2008 at the Xcalibur Bowling Centre, a disco-themed bowling alley in Surrey, British Columbia, Egerton, the janitor, has allowed two groups of teenagers to bowl against one another after hours. The "prep", Steve, is still bitter after his best friend Jamie, the "jock", had sex with Lisa, a girl with whom Steve was smitten and even took to their senior prom. After Steve and his friends Joey, Patrick, and A.J. harass the "tranny", Sam, they are chastised by Jamie. This leads to a brawl between Steve's team and Jamie's. Lisa breaks up the fight by dropping a bowling ball on Steve's foot just as Steve is about to kick Jamie again. Egerton, brandishing a shotgun, tells the teenagers to leave and they can continue their tournament the following night.